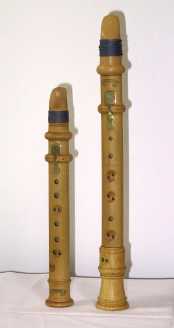 The chalumeau (pl. chalumeaux) was a French single-reed woodwind instrument that resembled a recorder, but used a mouthpiece much like a clarinet's. It developed in late 17th-century France, and eventually gave rise to the clarinet. Although, for a time, both instruments were in common use, the clarinet overtook the chalumeau in popularity during the 1780s, leading to the latter's eventual demise.

The chalumeau was made in a family of four sizes: Soprano, alto, tenor, and bass.

The chalumeau has an approximately cylindrical bore and a mouthpiece with a single reed like a clarinet. According to Wikipedia, "The unusual acoustic properties of both chalumeaux and clarinets, each behaving like a cylindrical pipe closed at one end, result in the instruments overblowing at the twelfth, meaning that the upper register sounds one octave and a perfect fifth higher than the lower." This is different than most other woodwind instruments that overblow at the octave.

The word "chalumeau" was used in France in the twelfth century to refer to various sorts of pipes.

In the late seventeenth century a better form of the chalumeau was made. This baroque chalumeau represents the similarity of the recorder and the clarinet, and had a cylindrical bore with a mouthpiece similar to a clarinet's and had two more "throat" keys controlling notes at the top of the basic chalumeau register. The Chalumeau developed for many decades along with the clarinet. It had a big repertoire in the 18th-century chamber music and orchestral works.

The name chalumeau is derived from the Latin calamellus, itself from the Greek kalamos "reed".

Even if about eight original chalumeaux survived, some modern instrument makers are making replicas of these very old chalumeaux. The present day makers of replica chalumeaux include:

Other makers, including Hahl and Kunath, produce modern adaptations of the chalumeau.