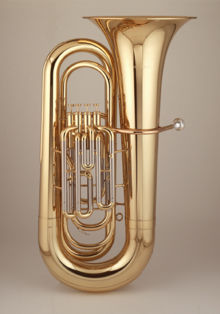 The tuba is the lowest instrument in the brass family. Like all brass, its sound is produced by the performers buzzing his lips into a cup-shaped mouthpiece. It is one of the more recent additions to the orchestra, first appearing in the mid 19th century when it began to replace the keyed ophicleide. The word "tuba" is actually Latin for a "trumpet" or a "horn" of sorts, as in the Tuba mirum of the mass.

In any score the tuba is placed at the bottom of the brass section. In wind band and orchestral music, usually only one part is written for tuba, and the key of the instrument is usually not specified. It is not customary to include a divisi part in orchestral music, however in wind band music it is acceptable. In brass band music however, parts are written individually for both the bass tuba in F or Eb and the contrabass tuba in CC or BBb.

The tuba has a smooth round full tone, deep and sonorous enough it can fill an entire hall. However, when one is writing for the tuba they must consider where it would be performed (e.g. a concert hall, outside, in a parlor, etc). In some concert halls the tuba's sound can overpower an entire band or orchestra, however in others the sound may be lost completely in the rafters of a tall auditorium. Some halls are designed with the tuba and euphonium in mind, having slanted ceilings to project the sound more towards the audience. On stages lacking this feature, a shell is often put up behind the performers to mimic this characteristic. Rooms with low ceiling may also inhibit the characteristic resonant and powerful acoustical tone of the tuba, which does not fully develop for approximately eight feet (2.4 metres) from the end of the bell.

The range of the tuba is quite vast, the lowest notes reach down below the range of the piano and the highest reaching upwards of F4. It's lower range can be loud, raspy, and describable as "flatulent" in nature, while the upper register can be rich, smooth, and sweet sounding. The timbre may noticeably thin out above C4 for most players, though professionals learn to maintain a clear and resonant tone upwards of F4.

The composer should not be pestered to specify his parts for either bass or contrabass tuba unless composing for brass band, though it has been done in the past. The bass tuba is the higher instrument, generally pitched in F in the United Kingdom and surrounding regions, and Eb in the United States. The contrabass tuba is in CC in the UK (meaning C below, as opposed to above the bass tubas), and typically BBb in the US. While professional orchestras and freelance tubists may use Eb tubas, most tubas used in the US, whether in highschool, college, or community bands or orchestras, tend to be of the BBb variety.

The bass tuba is used in repertoire demanding extensive high register playing. The performer is expected to transpose his music appropriately from a concert pitch part (unless in a brass band setting) and this should not be a burden of the composer. Most bass tubas are professional model instruments and therefore are fitted with four or more valves, which allow an extension into the range normally covered by the contrabass tuba, although the tone may be noticeably thin and less resonant.

The contrabass tuba is used in the vast majority of the repertory, where deep and resonant bass notes are typically called for. This instrument has a degree of difficulty in attaining the highest register notes as compared to its higher counterpart, and so the composer should keep in mind what kind of tuba part he should be writing - one suitable to the bass, or the contrabass. Note that in highschool, college, and community band settings the only instrument readily available is typically the BBb tuba and most non-professionals are not suitable players for high register playing.

The tuba in modern music

Tubas can be found playing in most symphonic orchestras, wind bands, brass ensembles and marching bands around the world. It isn't used much, if at all, in popular music, unlike other instruments such as the saxophone, however, the tuba occasionally finds a place in jazz, where it can play the role of a double bass.

In most classical music the tuba is confined to a small role. There has been various concerti, sonatas, and other pieces written for the tuba, but for the most part the tuba is more of a supporting role, sometimes doubling a stringed bass part. Most orchestras usually only have one single tuba, although occasionally they require a second tuba, in which case an orchestra might hire a guest to come and play the needed part.

The Tuba in Jazz

In some jazz bands the tuba might play the 4th Trombone part, but some pieces have a part all for the tuba. In big bands the tuba might play a stringed bass part, but also could add to the trombone's parts. In a few bands the tuba is the lead instrument. The popular band "Empire Brass and Friends" is one example of a jazz band in which the tuba plays the role as the lead instrument. New Orleans style Brass Bands like Dirty Dozen Brass Band, Rebirth Brass Band, and Nightcrawlers Brass Band feature a sousaphone as a jazz bass. Other jazz composers, such as Miles Davis, make use of the tuba in a few of their works by writing a part similar to the trombones, although sometimes it will have a different part entirely.

The Sousaphone was invented by John Phillip Sousa to project the sound of the tuba forward in marching situation. The Sousaphone is characterized by it's circular construction - the tubing rests on a the should and is worn completely around the body. Adjustable bits and extenders are used to bring the mouthpiece into a comfortable position. Though the tone of well-constructed Sousaphone hardly differs from a concert tuba, it should be noted that due to the forward facing bell the instrument will tend to have a more intense tone with greater carrying power.

The recording tuba is essentially the same as any other tuba (usually found in the BBb variety in 4/4 or larger) was made with a forward bent bell so as to facilitate tape recording by a microphone in band settings. These tubas are now rarities and see little practical use today.

The contra is a tuba that is held upon the performer's shoulder. The tubing, valves, and leadpipe are all constructed differently than the concert tuba so that it can be played in this position. Though popular in Drum Corps International, few high school and college marching bands use contras. A closely related variant, the convertible tuba, has an interchangeable leadpipe that can be moved from one position to the other, allowing the instrument to be played on the shoulder, or on the lap.