The trombone is a brass instrument lying in the tenor/baritone range. Unlike other brass instruments, trombones do not use valves as their main method of achieving the desired pitch. Instead, trombones use an extendable slide, which offers both advantages and disadvantages over the valve system. One distinct advantage is that it provides constant control of intonation, so a trombonist can theoretically never be out of tune. The name originally comes from the Italian name for the 'trumpet' (tromba) and the suffix for 'big' (one) which combined is trombone. Trombones are derived from sackbuts, a renaissance instrument very similar in design to the trombone but with a narrower bore and smaller bell and thus a thiner, less powerful sound. The name 'sackbut' was originally a compound French term, saque-bute, meaning pull-push.

Of the many types of trombones the tenor is by far the most common followed closely by the bass and alto. Other trombones such as the, contrabass, soprano, sopranino, and piccolo trombones are less common and should not be considered standard outside of specific situations. Other variations on the trombone have valves similar to a trumpet or even a slide and valves such as the "superbone".

The tenor trombone, the most common of trombones, is a brass instrument of the tenor/baritone range. The standard tenor has a slide with seven positions ranging from 1st (slide all the way in towards the player) to 7th (completely extended away from the player). A trombone without a an attachment valve is called a "straight tenor" trombone (see image above). The fundamental pitch is B-flat.

The major variation on the tenor trombone is the addition of a rotary valve to extend the range downward. This valve lowers the fundamental pitch extends the fundamental pitch of the instrument downward by a perfect fourth, changing the fundamental from B-flat to F in first position. Aptly named a "F Trigger", it allows notes below the range of the straight tenor past E2. Another major advantage of the F Trigger is that it offers more alternate positions in the lower register; when enacted and the slide is in 1st position, the F trigger acts as a substitute 6th position. This alleviates the problems of wide leaps and slide shifts that would otherwise be very awkward to play on a straight tenor. However, the upper range of straight tenors is considered greater than trigger trombones. Straight tenors are also considered to sound much lighter and more mellow which makes straight tenors well suited for jazz as opposed to the more bombastic classical use of the instrument.

A bass trombone is a trombone in the Baritone/Bass register similar to the tenor trombone with F trigger. However, bass trombones have a much larger bore and larger mouthpiece than the tenor resulting in a much fuller lower register. All trombones will have an F trigger at the minimum, however, professional and semi-professional models will have two or more valves. Most common are the E-flat and D triggers which add alternate positions and added range to the bottom of the trombone. Models with two triggers create a triple instrument and often are used together to get a clear sound on the pedal tone fundamentals.

The alto trombone is the third most common trombone and has been used alongside the tenor and bass ever since the trombone entered the orchestra. However, in recent years, the trombone has fallen out of use in the orchestra being replaced by the larger tenor trombone. Alto trombones have a large solo repertoire and several concerti from the Baroque period such as Georg Wagenseil's Concerto for Alto Trombone in E-flat. Unlike the tenor and bass trombones, the alto is pitched in E-flat, same as the alto saxophone. While not uncommon, writing for alto trombone should be cautioned unless the composer knows that one exists in the particular ensemble he/she is writing for. 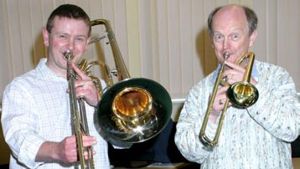 The contrabass and soprano trombones

Other variations on the trombone exist in sizes smaller and larger than the aforementioned tenor, bass, and alto. These are rare today outside of specialized uses. The soprano trombone is a smaller version of the tenor trombone pitches an octave above the tenor. It is often confused with the "slide trumpet" a trumpet-derived instrument with no valves looking very similar to a soprano trombone. Smaller variations such as the sopranino trombone in E-flat and the piccolo trombone in B-flat are very rare and should not be written for without specific knowledge of the instrument and players involved.

The rare contrabass trombone, unlike the bass trombone, is pitched in F, a perfect fourth below both the tenor and bass instruments. This instrument was first scored in classical literature by Wagner in The Ring. Being such a cumbersome instrument, the contrabass often features a doubled slide to alleviate the extreme extensions into the lower positions. The contrabass does not see extensive written repertoire outside of the trombone choir, in which it fills the lower harmonies or plays the bass line.

The valve trombone comes in sizes ranging from alto to contrabass and have equivalent ranges to their slide-mounted counterparts. The tenor valve trombones are the most often seen. Because of the nature and effects of valves on brass instruments, the valve trombone tends be more resistant than the traditional slide-trombone.

The contrabass valve trombone, predecessor to the modern bass tuba, is often referred to as a cimbasso and has been called for in the operas of Verdi and Puccini. Most models have a distinctive 'bent' shape and up to five valves, usually of the rotary variety. Today, tuba players almost always play these parts on tubas.

Because of the use of the slide, lower down the instrument, agility can be much less than other brass instruments. However, higher up around the top range, the slide positions are all very close together. A very hard shift is Bb (2nd line of Bass Clef) to B natural one above it. This is because one has to move the slide from first to seventh position. Trombones should be able to play eighth notes (semiquavers) though, so long as long shifts such as this one aren't included. Also, like every brass instrument, large jumps of more than an octave are quite difficult.

Timbre on the trombone is more varied than most instruments. Trombones can produce a very harsh, very loud sound, or a very smooth warm mellow tone, depending on how they are played. Generally, the higher register is more smooth, simply because in the upper register slide positions are closer together. The trombone is the loudest instrument in the orchestra and is used to such effect by composers such as Tchaikovsky, Wagner, Strauss, Mahler, and Shostakovich.

The range of a tenor trombone is from the 'E' on the ledger line below the stave in bass clef up to the D on the second to top line of treble clef. Higher notes can be played, but they are difficult to produce and sometimes inaccurate. In addition to this, the low Bb, A, Ab and G below the bass clef stave can be played, these are known as pedal notes. If a bass trombone is being played, the lowest note would be the F one octave below the F under the bass clef stave, and the highest note would be the F which is the bottom space of the treble clef.

A trombone with an F attachment trades a bit more difficulty in the higher register with access to lower notes a normal trombone can't handle. The range between the E below the bass staff and the pedal notes (really low B flat, A, A Flat, G) can be reached with a few exceptions. The low D Flat, C, and B natural are all difficult to hit without the extra trigger the bass trombone provides, but the E, E flat, and D natural can all be reached using the trigger.

Many trombone players, in addition to single tonguing, can also double and triple tongue. This make fast passages a lot easier to play, but can be difficult to maintain for a long period of time. In addition, some jazz trombonists also learn a technique referred to as 'doodle' tonguing which allows for extremely rapid playing but with much less distinctness to each note. Doodle tonguing is used almost exclusively in jazz and cannot be expected from orchestral players. Another type of tonguing is flutter tonguing, a technique that creates a harsh sound similar to that of a rolled 'r' in many Latin-based languages. This type of tonguing, unlike the others, has no defined note subdivisions, only a beginning and an end. The flutter tongue is used in many different genres from jazz to rock to music of the romantic period and beyond and is denoted with three lines across the note stem (the same marking as a tremolo or a drum roll).

Glissandi are made particularly easy on the trombone. With a moving slide, one pitch can be slid straight into a pitch above or below so long as the interval doesn't cross any gaps in the instrument's harmonic series. For instance, sliding from D3 to A3 could not be done smoothly because the F3 betwixt, a note in the instrument's natural harmonic series, is in 1st positition and the subsequent note, F#3, would require a sudden jump into 5th position. In contrast, a jump from A3 to F4 would be very easily managed due to the fact that F4 is in 1st position and A3 could be played in 7th. This would be one single motion and easily managed.

Writing for the Trombone

Writing for trombone should be done in concert pitch with the bass clef. While using a tenor clef for high passages used to be the norm until recently, many trombonists dislike the practice and is discouraged today; this is especially true for big band writing. Octave lines should never be used. For the brass band, the trombone is written in treble clef as a Bb transposing instrument (like every other brass band instrument) with a transposition interval of one octave plus a major second, same as that of the tenor saxophone and bass clarinet.

Typically, the easiest keys to play in are concert Bb, F, Eb, C, and G. These avoid many of shifts between far away slide positions. Air usage varies with the instrument. Generally, a bass trombone will need to breathe a lot more than a tenor trombone. Composers should be conservative when writing for trombone and give frequent breaks for breaths.

While the horns, trumpets, and tuba has very typical and obvious roles in the orchestra and band, many overlook the trombone and become confused with how to treat it. While the horns are the alto and the tuba the bass, trombone can easily play tenor lines in four-part harmony. Here are some other things to consider using the trombone for:

Further note that the seventh degree of the harmonic series will tend to be flat. Realize that for all notes that can be played in 1st position, all notes 6 semi-tones below each can be played in 7th position, while the notes between will be between 1st and 7th. This way, all glissandi can be easily played be sweeping from a higher position to a lower position without necessarily crossing over 1st position.

Illustration at right of the usable harmonic series in 1st position, to be lowered in successive slide positions by semitones. Bottom note indicates location of first pedal tone.

When writing trombone glissandi, any single glissandi cannot cross over any of pitches written above, as this would involve instantaneously shifting the slide from a higher to a lower position. In addition, for each of the notes written above, the slide can be extended downward for 6 more semi-tones. For instance, while a slide from A3 to D4 may be feasible, it would not be possible to slide from A3 to F4 or C3 to G3. Thus, any trombone glissandi cannot exceed seven semi-tones in range.