James Householder is a young composer and multi-instrumentalist from western Pennsylvania, USA. James, 20 years of age, is a recent graduate of Penn-Trafford High School and is attending Indiana University of Pennsylvania for music education. In addition to his primary instrument, piano, he seconds with violin, and is additionally self-taught in most other orchestral and band instruments. His compositional style has often been identified as neo-classical or neo-romantic and among his sources of inspiration for music and composition are such greats as Beethoven, Mozart and Debussy as well others such as Richard Strauss, Nobou Uematsu, Michiru Oshima, Philip Glass, David Gillingham, and David Maslanka. 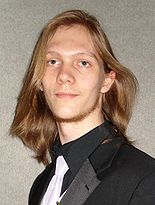 Home schooled as a child until sixth grade, James spent the beginning of his seventh grade year at McClure Middle School in McKeesport, Pennsylvania where he discovered the concept of concert band music and was also inspired to take up the violin. In 2002, he moved to the city of Greensburg, PA, where he immediately got involved with the school band and began piano and violin lessons under David and Mary Volker respectively. For two years he played mallet percussion with the band and additionally performed solo piano works including Liszt’s Hungarian Rhapsody No.2 and several of his original compositions. He also began playing piano with the middle/high school jazz band and was invited to assist as percussionist in the high school program as well as appear as guest composer to the work, Rhapsody No.7 in Bb for Concert Band.

As a freshman in the Greensburg Salem High School, James immediately joined the marching band in which he continued specialising mallet percussion and began playing clarinet for the indoor wind ensemble. In addition to his band-related performances, he also accompanied for the Seton Hill Music Program. It is also at this time that he joined the Westmoreland Youth Symphony Orchestra (WYSO) under the baton of Mr. William Starnes (currently directed by Mr. Morrie Brand). When he moved to Harrison City in mid-2006, he was enrolled in the Penn-Trafford High School and joined its class AAAA competitive marching band under the direction of Mr. Thomas Monteleone, former bassoonist. James performed with the front ensemble for one season and marched Sousaphone for two. He began playing trumpet in jazz band and was principal tuba with the concert wind ensemble. In the WYSO he played violin and later horn, occasionally doubling trumpet and piano when needed. He also performed clarinet and bassoon for the Penn-Trafford production of "Seussical the Musical." Under the studies of his private teachers, he has also performed both piano and violin in private recitals and additionally played in the following competitive ensembles: 2007 PMEA District One Honors Band (4th horn), 2008 PMEA District One Honors Band (principle 2nd horn), 2008 District One Band (4th tuba), 2008 WCMEA County Band (1st horn), 2009 PMEA District One Orchestra (principle 2nd horn), 2009 PMEA District One Band (1st horn) and 2009 PMEA Region One Band (3rd horn).

James is currently attending the Indiana University of Pennsylvania (IUP) as a undergraduate music major. He is a one season member of the IUP marching band, "The Legend", as well as several indoor ensembles while undertaking a double major in music education and music composition and theory with piano as a primary declared instrument.

About: James began self-taught piano at age 12 and it remains his primary instrument. He has only had lessons in piano and violin at present, all other instruments are entirely self-learned in spare time. James also enjoys the ability to play music using only his hands, an art referred to as "hand whistling" or "hand cooing". He enjoys a full two octave range spanning from G4 to G6 and cordially invites any composers to write concert works for such an "instrument". He has also been known to experiment with straws, rubber bands, rulers, pencils, random hollow tubes, fan blades, and other household items in pursuit of abstract music-making.

James has recorded himself as various small ensembles for personal amusement. All recordings involving multiple instruments are layered multi-tracks mixed using Reaper software. All files are hosted on Box.net

This is only a list of completed or finished compositions. Although the majority here are listed as opera, none of them are formally published and a new list will be created upon any formal publication. For a full list of complete and incomplete works including a listing by date, see List of Compositions by James Householder.

James has also recently begun to experiment with looped improvisation; these are posted on Facebook.