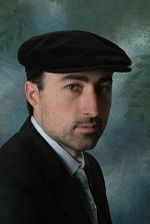 Saul Dzorelashvili is a classical composer and pianist. He was born in the republic of Georgia, a small eastern European country on December 20 1976. At age two he moved to live in Israel together with his parents and sister and at twelve he moved to New York City. At age fifteen Saul began taking his first piano lessons from his mother. Few months later he began to take piano lessons from the Ukrainian born pianist Margarita Sturman. From the beginning of his piano lessons, Saul felt more connected to the art of composition then the art of performance. He began composing seriously by the age of 22. He has written over eighty orchestral, chamber and Piano works. He uses the finale 2004 software to write his works. He also finds great pleasure with improvisation.

Saul's favorite composer is Felix Mendelssohn. His music is very traditional, it sounds classical and romantic yet very original. He believes that a composer must try to achieve an original and distinctive voice and style. Music that sounds just like another famous composer shouldn’t be the goal or the outcome of a composer's output. After studying the music of the greats a composer should begin to search for that personal and direct approach to music.

Saul Currently lives In New York City and is banned forever from the PianoWorld.com forums.