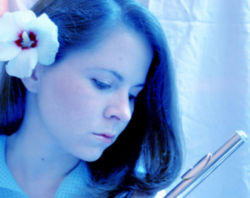 Nicole Randall is a composer and flautist living in Atlanta, GA. Her works have been performed from Alias Chamber Ensemble in Nashville, TN to flautist, James Strauss in Recife, Brazil. The bulk of Nicole’s work is for the concert setting, but she has also set some films to music, winning “Best Original Score” for the 2003 Atlanta 48 Hour Film Project for the musical “Storyboard in A Major”. Nicole's works have been featured on "Live in Studio C", bowed.org, and Dartmouth College's Electronic music festival. Nicole received her Bachelor’s in Music Composition from the University of Georgia where she studied with Dr. William Davis, Dr. Leonard Ball, and Dr.Lewis Nielson and was selected for master classes with Charles Wuorinen and Joan Tower.

Nicole, as a flautist, currently performs with the woodwind quintet, Highland 5, with guitarist Brian Luckett in duoATL, Capitol City Opera, and various jazz situations throughout Atlanta. You can find out more and listen to Nicole’s music at http://www.nikkinotes.com