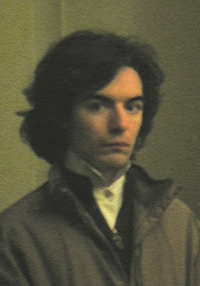 Miguel Bulteau Carneiro Rodrigues was born in Lisbon, Portugal, on April 13th, 1989. He joined Young Composers on February 22nd, 2006. Primarily an aspirant composer and playwright, he also enjoys drawing albeit showing no interest in perfecting his technique.

Miguel's first contact with music was the recorder in middle school ("Escola Salesiana do Estoril", or "Salesian School of Estoril" in English (SSE), the school he frequented from the 1st to the 12th grade), at the age of 9, where he showed little or no skill at all. However, that was when he learned how to read and write music. He then took piano lessons at the age of 13 and subsequently quit after four years. He is currently studying at the Academy of Amateurs of Music in Lisbon.

He first composed small, not even classifiable mini-sets of untrained music in his rather thin second year of piano lessons, besides playing some things by ear.

Due to his rather weak and untrained relative ear, Miguel is used to composing in Finale; it being practically impossible for him to compose without an instrument by his side.

Although it might be too early to tell, it has been said that Miguel's style is already recognisable. It varies from bizarre renditions of romanticism to classical-sounding pieces with a touch of syncopation. He is also said to be heavily influenced by video game composer Grant Kirkhope in some of his works (or simply some harmonic progressions).

Showing an interest in musical theatre from an early age, Miguel wrote four amateur plays in total. One being a stage adaptation of Tim Burton's Nightmare Before Christmas, and two of them having been written with a friend.

The Nightmare Before Christmas

The entire cast of The Nightmare Before Christmas - After the play.

Having being fascinated by the film and its score, Miguel decided to stage a 45-minute version of it in the christmas play routine of SSE at the age of 15. Recruiting up to fifty colleagues from the 10th to the 12th grade (Miguel being in the 11th at the time), he acted as the lead role and the stage director along with one of his friends, who offered valuable help with the choreographies and the entire organisation of the event (besides acting as the main antagonist).

Nightmare Before Christmas (literally translated into Portuguese as Pesadelo Antes do Natal, the music retaining its original language as it was lip-synched with the best possible accuracy), staged on December 11th, 2004, was considered the best play to have ever been staged at SSE in 15 years. It was requested by the city hall to be repeated at the Gil Vicente Theatre in Cascais. However, due to the obvious lack of professionalism, the repetition did not match the standards of the première. 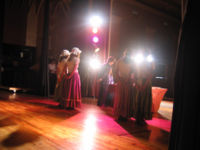 The Rivals - Taken from behind the scene.

Os Rivais, in Portuguese, is a comedy originally conceived at the age of 16. It had already been brewing in Miguel's mind at the time of Nightmare Before Christmas, and he started his work on it after the Christmas of 2004. However, after having written the first two scenes, Miguel joined with a friend to write the remainder of the play; its original structure already previously defined. The entire finished play runs for 2 hours.

The Rivals takes place in a very late 18th century entirely fictional and anachronism-filled setting, in which the character's vocabulary is like the present day's. It is centered around a poor composer and a rather dignified military general who fight for the same rich aristocrat they've fallen in love with; each character having their confidant to support them in their decisions. The entire play is a set of comical situations that follow the plot to its abrupt and unexpected end.

The play contains small mute scenes in which music governs the action on stage. This is a favourite tool employed by Miguel in most of his works. The music used in The Rivals ranged from Mozart to Brahms, along with other clips from Bizet, Tchaikovsky, Strauss I and II, Stravinsky and Poulenc.

The Rivals was staged during a themed "Culture Week" at SSE, on May 23rd, 2005. Both Miguel and his co-writer worked as stage directors and actors (him acting as one of the lead roles and her as one of the confidants). It was a success. A repetition was asked by the school principal, which, once again, did not match the standards of the première for its lack of professionalism.

The Grail of Mess

Following the school-contained success of The Rivals, Miguel and his co-writer decided to write a sequel together. They began to work on it barely a month after the first play's sole repetition and finished writing it around July. The Grail of Mess (O Cálice da Confusão, in Portuguese) is an improvement upon its predecessor not only because of its more complex plot, but also because of its wider steps towards musicality and the adding of two professional actors that had professed their interest in the play after seeing The Rivals. Along with those two actors, two school teachers were also added to the cast.

The play takes place 15 years after the events of The Rivals (now at the beginning of the 19th century), introduces new characters and an entirely new and rather nonsensical plot involving a greedy family, a magic grail and eternal life. It is written to make the plot look as complicated as possible without escaping the rules of logic. It runs for 3 and a half hours.

Like its predecessor, The Grail of Mess also employs the musical mute scenes. This time with clips from Poulenc, Mozart, Strauss II, Prokofiev, Minkus, Shostakovich, Beethoven, Berlioz, Dvoràk, Mendelssohn, Offenbach and Stravinsky. An addition to this was the translation of Strauss II's Im Feuerstrom Der Reben and the writing of lyrics for specific parts of pieces: Strauss II's Unter Donner und Blitz, Dvoràk's cello concerto, and Mendelssohn's Scottish Symphony.

The Grail of Mess was staged at SSE on January 13th, 2006 (a Friday, curiously enough), and scored another success. The 500 seats of the theatre were all taken, other several people had no choice but to stand. This would to be the last play Miguel would create along with the same co-writer.

The city hall asked for a repetition at the Gil Vicente Theatre (as it had done with Nightmare Before Christmas), but Miguel refused to be part of it, fearing another downfall from the première like in previous plays. "I shall only allow further performances of plays I've had a part in their creation when I'll have the opportunity to work with professionals", he said to his co-writer, leaving her with free power to repeat it, only without his participation. A second performance never occurred.

What If The World Ended Today? 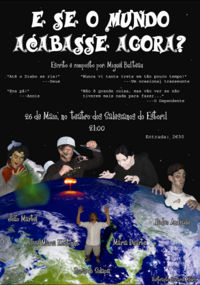 Poster for What If The World Ended Today?

Bearing in mind projects for a large-scale musical comedy originally entitled Apocalypse... Now?, Miguel considered them to be too complicated for the means available to him. However, following the persuasion of two friends (who had acted in all the previous plays) to stage it, he began writing and composing a small and far simpler version of it on January 2007. Following a serious case of writer's block, he finished What If The World Ended Today? (E Se o Mundo Acabasse Agora?, in Portuguese; shortened to ESMAA, or WITWET in English) around April and began rehearsals with the shabby means available.

Since the SSE theatre was taken from January to April for Annie, a large and far more serious production than his humble amateur musical, Miguel and his five actors had to use a classroom and an iPod for their rehearsals. This time, he did everything but act. As soon as Annie was over, he began rehearsing in the theatre. However, due to lack of organisation and having not been familiarised to the stage during the previous rehearsals, many vital issues were missing, making it impossible to perform WITWET on May 26th as foreseen. With the valuable help of Annie 's conductor, former member of the theatre's technical staff and an experienced person when it comes to stage productions, the rehearsals took on a faster and more productive pace; that enabled the postponing of the première to only a week later: June 2nd.

WITWET takes place in the current times. A common man is visited by the Four Horsemen of The Apocalypse who have come at his door to take shelter from the rain. They're about to wreak havoc when they're told by God that they've arrived too soon. Awaiting the rain to pass so as to return home, they explain to the common mortal why they were about to terminate the world. Amidst an evening of a few drinks and song, they savagely (yet comically) criticise modern society in every aspect. Being a Portuguese smaller version of the original concept, Miguel chose to focus mostly on Portuguese society, although worldwide issues like war and hunger are not ignored.

WITWET's première, with its short duration of 1 hour and a half, and its modest ensemble of piano (Miguel), guitar (one of the actors), violin and double bass, was technically the first public appearance of original compositions by Miguel. Far from being serious works, some of the short songs are entirely composed by him, while others are adaptations of known tunes to the ensemble used, with added or modified lyrics. Such pieces include: Strauss II's Voices of Spring, Rossini's Largo Al Factotum, Oliver Wallace's Painting the Roses Red, Berlioz's Marche au Supplice and Kirkhope's Hailfire Peaks.

Having finished high school a year sooner (summer 2006) for jumping a year, Miguel is currently in his third year of an English language course in the University of Lisbon. He's also at the Academy of Amateurs of Music, in Lisbon as well.

- Most Berlioz (or any other music that makes him feel good)

- Bread crumbs in the butter

- People who bother him

- "Skizzo", 15 seconds for a cartoon introduction

- String Quartet #1 in A major

- Sonata for flute and piano, "For Susana"

- Fantasy for cello and clarinet in Eb minor

- "Nonsense-Scherzo" for bassoon and piano in G major

- "Caffeine Scherzo" for Violin and Piano in D minor

- Capriccio for Cello in C minor

- Scherzo "Little Devil" in A minor

- "What If The World Ended Today?"

- Dies Irae, for a Requiem

- Catapriccio and Rêverie in F major

- Variations on a theme in C major (INCOMPLETE)

- Variations on a theme by Jun Ishikawa (INCOMPLETE)

Miguel can be contacted at mbulteau[at]gmail.com