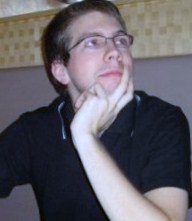 Matthew Becker is a Canadian composer, mostly self-taught, who began to show an interest in writing music during his teenage years. He first composed a piece at the age of sixteen, and since then has dedicated his studies in the field of theory, harmony and composition. He mostly composes for small ensembles, but also contains works for larger settings, such as the full orchestra. Currently, his is completing a Masters degree in composition at the University of Saskatchewan (located in Saskatoon).

Works are heavily influenced by Neoromanticism, with long and dramatic melodies, shifting in and out of keys. Enjoyed using big, dramatic chords, and strong cadences. Earlier works contained a lot of upbeat, high-tempo music, whereas more current compositions are slower and deeper. More recent works, while atonal in nature, still contain a romantic influence due to melodic gesturing, and overall flow of the work. They can also be called minimalist and progressive, as these works contain one or two small melodic ideas which are greatly expanded through progression.

The process of composition usually involves sketching out different ideas - in free form - on manuscript paper. The work is then scored in notation software.

Major influences include, but are not limited to:

These projects consist of artistic works to which music has been set:

More than 45 individual pieces have been completed since 2000 including: