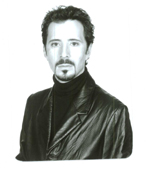 Jorge Vidales is a Mexican composer interested in forging a personal voice that embraces both tradition and innovation, in a quest that tries to integrate the rich heritage of twentieth-century music with the musical reality of today, into a language meaningful to audiences as well as musicians.

In 2000 he was the recipient of the Young Creators Grant, awarded by the National Endowment for Arts and Culture (FONCA).

He has received commissions from some of Mexico´s leading performers, and his works have been performed abroad in Italy, the U.S. and Latin America.

He has done extensive work in the field of musical theatre as a pianist, conductor, arranger and composer. He is also a regular contributor to Pauta, Mexico´s leading music theory and music criticism publication, where he has published articles on music theory and esthetics. Extracts of his graduate thesis on musical time have appeared to favorable reviews.

(2003) For Vibraphone and Piano. 12'40 ca. Comissioned by percussionist Roberto Zerquera

(2000) For Solo piano. 15' ca. Composed on the Young Creators Grant, awarded by the National Endowment for Arts and Culture.

Or E-mail him at: