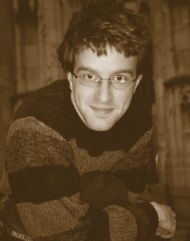 Jonathan Howie was born in Marquette, Michigan, on September 19, 1983, to Thomas and Catherine Howie. At age one, his family moved to West Chazy, New York, where Thomas began working for WCFE-TV, a public television station. Catherine, being a music student herself, taught Jonathan in music at an early age, and began piano lessons when he was five years old. When he was sixteen, his parents decided to join the para-church missions organization Campus Crusade for Christ, and as a result, the family moved to Fishers, Indiana in August 2000. Jonathan had recently taken an active interest in piano, and after moving began taking lessons from Anna James.

In September 2002, Jonathan began studies in Applied Music at Indiana Wesleyan University with an emphasis in piano. After studying piano for four years under Dr. Eunice Rickey, Jonathan performed his Senior Piano Recital, which included an original work for piano, as well as an arrangement of one of Catherine's songs for brass quintet. He started writing music in May 2004, during a may term at Indiana Wesleyan University. After writing a three-part piano suite, Jonathan stopped writing until September that year, when he began his first piano duet.

Now graduated from Indiana Wesleyan with a Bachelor of Arts degree in music, Jonathan is studying composition under the guidance of Eric Wilson, who lives in Anderson, Indiana. He is currently finishing his first two orchestral works: an orchestral transcription of his piano duet, and a film-style work for the Young Composers Film Competition.

Jonathan is reachable via email or via the Young Composers Forum.

Jonathan writes music with pencil and paper, and also using the popular music notation software Finale. His style is strongly influenced by music in the Impressionist style, as well as music from popular movie and video game soundtracks. Most of his piano works were completed in under a week, and works for orchestra will take anywhere from two weeks to a month to finish.