James Graham (not to be mistaken with J. Lee Graham) is a young, classically-trained composer. His two major projects at the moment are a Requiem Mass and a Symphony. He generally composes in a semi-classical style, but has recently been influenced by romantic composers such as Dvorak and Schubert.

"I have been affected by a great many composers in my life - most notably are, of course, Mozart, Salieri, and Bach."

James Graham has, on certain occasions, written plainchant "...just for the fun of it." These pieces have not been released and are not likely to be put out any time soon. The "monk chant," as he calls it, "is fun to write. It is also amazing and empowering to see how music has changed over the course of a thousand years."

James' original classical compositions (he had written in several other genres before he found his niche in classical style) were very simplistic, often echoing a very simplistic Mozart sound and often using an Alberti Bass (or frequently a modification of it). These earlier compositions eventually developed into thicker, more interesting, style of music in which James has developed his own personal style.

As James' studies in music went further, he began to be influenced by late-baroque and classical composers. This contributed to the development of James' compositions, allowing them to become grander and more dynamic than before. In recent times, James has been influenced by Romantic composers such as Dvorak, Tchaikovsky, and Schubert. These composers have influenced James' music to have a thicker texture.

James is currently working on several compositions - revisions to Symphony #1 (Fourth Movement), a Requiem Mass (the Introit is nearing completion), and a CD.

"TL;DL" will be James' first major CD work, an eclectic CD of different styles and themes from rock, to Spanish Guitar, to Classical. Many of the songs will feature lyrics, and those that do will mostly be comedy songs that parody pop-culture such as the CD's first track "Who Ate My Fruit Gushers?". When complete, the CD may be available for purchase as an electronic download from iTunes.

Many of James' completed works have not been released to the general public. But, some pieces are on the NewGrounds Audio Portal, some are on his YouTube account, some on his Composer's Forum account, and some on the Young Composers forums.

James' first sinfonia is titled "Requiem for a Composer". It is in three movements, the first two movements were originally sketches for his full-length requiem mass. Instead of being scrapped, those themes were recycled and used in this sinfonia.

The second sinfonia, which does not have an official title, currently stands as incomplete. The composer is unsure of whether he will ever complete this composition, or if it should just be released as is (the two completed movements would bring the total length of the sinfonia to just over four minutes).

The "Fantasia in F# Minor" is designed to mimic the style of church music, complete with a Tierce de Picardy (also known as a 'Picardy Third'). The composition has some collision problems and the ending needs a major reworking. The piece has received mixed reviews.

"Aria d'Amore" is a very recent composition of which James is fairly proud. It is dedicated to several of his closest friends and has an almost scherzando feel to it. It is written for string quartet, although James plans to transpose it for a woodwind choir in the near future. 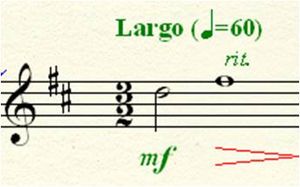 "In Memoriam" is a composition inspired by the poem "Abschied" by classical German poet J.W. von Goethe [1]. It is James' first work in the time signature of 3/2 and it is written in the key of B Minor.

Symphony in C Minor is James' first major multi-movement work. Although the fourth movement is being revised, the rest of the symphony stands as complete. However, that is not to say that the music will be released as it currently is: there's every possible chance that revisions will be made in the near future. Overall, the Symphony stands at about 15 minutes, much shorter than conventional symphonies, and has a very Mediterranean feel to it, separating it from many other symphonic works.

James is currently involved in writing music for a game modification. A group of avid "Battlestar Galactica" fans have opted to make a modification for the game "Star Trek: Armada II" to recreate the world of Galactica (both the old and new series). James volunteered to write the music for the mod in order to make the mod feel more complete.