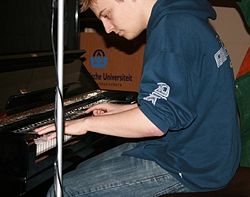 Jaap Cramer, born April 13, 1984, started playing piano at age 5 when he got his first lessons. The teacher played the lessons once for him, then Jaap played them by ear, instead of reading the notes. After a while he started composing his own pieces. At age 11 he went to Nico Hovius, a private tutor who taught him the skills of writing harmony, forms, structure and orchestration (1995-2002).

Among piano, he also has been playing oboe for two years. When his second piano teacher moved he then started taking organ lessons for one year, and became a church organist (2001-now).

He started giving opus numbers when he started composing in 1995. Since then the counter is around opus 75, although many works are unfinished and abandoned. A collection with MP3's of finished works can be found at http://www.box.net/shared/b6u34hgito

(some parts are finished)