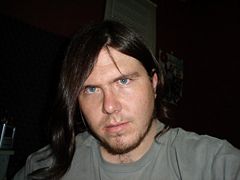 Dylan Ellis is a versatile Artist, Composer, Arranger, Producer, Session Musician and Audio Engineer. He has been in the music industry for 10 years now, and has established himself as a highly talented and professional musician.

By the age of 14 Dylan released his first album, and by 22 (June 07) he had built up three professional recording studios in Johannesburg, South Africa.

He is known for his skills on the guitar and vocals, but is also a keen Pianist, Bass Player and Drummer. He has studied music at two of South Africa’s most noted music schools "The National School of the Arts" and "The Collage of Performing Arts"

Dylan has played in over 40 bands in his career, some of which achieved international success. (Pyramid Tongue, Burnt Reason, Aion Truth, Asai, Sekel Maan, DDG, Visions, A Void called Freedom etc) He currently works out of Inner Flame Music’s “Studio 2” and “Studio 3” (based in Johannesburg, South Africa) Producing and recording bands/ artists, scoring films and composing jingles for various radio stations and TV companies, as well as building music libraries.

He is currently scoring the Films "Child Theif", "Code of War" and "Snow white in the wilderness" by "New Entity Films" and "Street Car Moving Pictures".