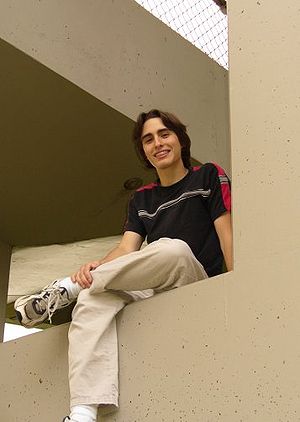 Chris Gallegos is a self-taught composer and pianist. He began composing at the age of 15, after two years of playing the piano. His first work was an atrocious piano piece written on pieces of lined paper. Unsatisfied with his work, Chris found a notation program online, began teaching himself music theory, and added more instruments to his songs. Now composing Contemporary Classical music for small ensembles, he is 17 and enjoys the self-appointed title of "Best Composer of Ballard High School". :P

If you would like to contact Chris Gallegos, for his compositional skills or otherwise, e-mail him at fermion@email.com. His Young Composer's Forum screename is Fermion. Apparently, he really likes fermions.

Chris's influences include classical composers such as Bach, Beethoven and Brahms. He is also influenced by modern composers such a Nick Gottschall and Konner Scott. However, his most powerful influences come from popular music; bands such as Tran-Siberian Orchestra, Tool, Rush, Led Zeppelin, Pink Floyd, King Crimson, and Kansas are all included in his list of influences.