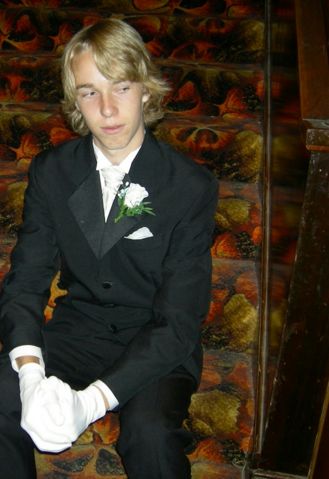 Austin Lancaster (b.1992) is an Australian year 11 student who has been composing since the age of 5. He plays piano, cello and guitar and mainly writes for piano, strings or orchestra but wishes to write for many different instruments/ensemble in the future. He currently uses Sibelius notation software.

Known as Austin on the forum and may be contacted here. To visit his Myspace music profile click here

Austin mainly writes classical/romantic pieces but has also written pieces in various other genres including jazz, folk and electronic. His influences include Beethoven, Debussy, Michael Giacchino and Danny Elfmann.

Austin's most recent project was writing the original soundtrack to the short film, "Hunchkiss" directed by a media student, Shon Bailey, who attends his school.

Two of Austin's pieces have been performed live. One of his early string pieces "River Rising" was played by Casorti Players at the Numurkah Town Hall in 2005, and his Cello Quartet was played by the Goulburn Valley Concert Orchestra's cello quartet at the Shepparton Westside Performing Arts Centre Centre in 2006.