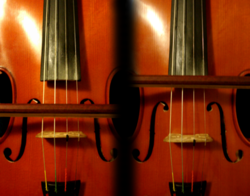 Bowing describes how the bow is used on an orchestral stringed instrument. For the violin, viola, 'violoncello, and double bass, the bowing techniques are largely identical with only minor differences. The bow is held in the right hand and drawn perpendicularly across the string at a point somewhere between the end of the fingerboard and the bridge. Exactly how and where the bow is used allows for a variety of timbres and articulations with each their own characteristics and a good string player is expected to have mastered each of the fundamental techniques and their combinations. While the composer is not expected to possess the technical skills of a professional string player, an understanding of bowing aspect of playing is a great asset in writing effectively for these instruments.

In the majority of scores, the composer is not expected to specify by name the exact type of bowing to be used - the string player or section will usually judge how a particular passage is best played, and furthermore, the system of articulation markings in common use is generally sufficient to convey a composer's intentions. Nonetheless, in contemporary music, bowing will occasionally be explicitly marked.

The bow consists of a piece of slightly flexible wood on which an amount of horse hair is mounted. It is held in and drawn using the player's right hand. Before playing, the player adjusts a screw at one end of the bow to tighten the hair enough to allow it to make firm contact with the string. The hair is then lightly rubbed with a substance called rosin, made from treated tree resin hardened into a block. The rosin is sticky and allows the bow hair to grip the strings enough to set them vibrating when the bow is drawn across them.

The part of the stringed instrument where the bow actually touches the strings is between the end of the fingerboard and the bridge, which suspends the strings above the body and transmits their vibrations into this body in order to amplify them. Within this area the player can choose how far between these two points the bow will be drawn, in order to produce variations in volume and timbre: the closer to the bridge, the greater the volume.

The speed at which the bow is drawn and the amount of pressure applied by the hand are also important in determining the exact sound produced. Players will also vary the amount of bow used according to the articulation required and the dynamic of the passage. At very soft dynamics, the bow must be drawn fast in order to keep the string ringing, whereas at loud dynamics this is not always necessary. Thus, a fast bow with hard pressure, drawn close to the bridge, will make a powerful, loud sound, whereas a lighter but equally fast bow near to the fingerboard will be the optimum for producing a light, delicate sound.

The player's hand must be very agile and able to control the bow precisely in order to produce a wide range of colour and bow strokes. Developing the arm's muscles in order to obtain this precise control can take several years of practice.

The down-bow stroke is executed starting from near the frog of the bow (i.e. nearest the hand). The bow is then "pulled" to produce sound. This is the stronger of the two bow strokes for symphonic strings, usually used on accented beats. The second stroke is known as the up-bow, beginning from nearer to the tip of the bow which is "pushed"; it is the weaker bow stroke.

With these bow strokes, there are several techniques that can be used to produce various articulations and effects. Note that, in the notation examples given, the bow-stroke symbols are explicitly stated to demonstrate the bowing; in string parts, the bowing is usually indicated only for the first note of a phrase or where an unusual bowing is used (e.g. two up-bows on consecutive détaché notes).

Détaché is played smoothly, without separation between notes. The bow direction alternates with each note. This is the default playing style if nothing else is indicated, although players, may choose to articulate otherwise to enhance the musicality of the passage, especially in solo parts.

In legato bowing, several notes are played in one continuous movement of the bow in a single direction. This gives a very smooth sound to the passage played legato, since no attack or break exists between notes. This technique is indicated by a slur between several notes. A slur may be split into several slurs by the player(s), usually because of its length or the player's interpretation of a passage.

Combination of legato and détache

Détaché and legato are both very common bowing techniques, and are often combined within a single passage. In the above example, the use of legato and détaché have caused the third beat to be played up-bow instead of down-bow (as it would be if the passage was played détaché). Furthermore, in the second measure, there is a significant difference in the distance the bow travels for each note between the legato and détaché notes: the three slurred notes will be played with a single long bow, and the single détaché note must cover the same distance in much less time. Because the blow must travel at a higher velocity on the détaché note, the player exerts less pressure on the bow. This nuance is often troublesome for beginners and amateurs.

On string instruments, the staccato articulation can be played in two ways:

Staccato
The bow is stopped but remains in contact with the string.
Spiccato
The bow is bounced off the string, often described as 'ricochet bowing'. The effect is clean and precise when done well. The player will have a precise control of where in the bow's length, and how high, to bounce off the string in order to execute any particular rhythm in the passage.

Staccato notes can be played in a variety of contexts, described below.

Strictly speaking, the only instruction one can truly infer from the staccato marking is that the note is not legato - i.e., it is separated from the following note. Precisely how short a note is to be played will depend on the note's written length, musical context, and interpretation. Staccatissimo is the only marking that always indicates a very short note.

A dot indicates separation between the marked note and the note that follows. A note marked staccato may sometimes be considered "short"; the bow is completely stopped between notes. Depending on context, marcato may be performed on or off the string, the latter being called spiccato.

A wedge indicates a rougher separation between the notes. They may also be played in whole bows; this is known as Grand Martelé and indicated by "WB".

An accent is performed in a manner similar to a dot, only with more bow pressure and a "gutsier" sound. If time allows, the player will usually play a single accented note as a 'down' bow. If there are a series of consecutive accents the normal up-down bow stroke is used. A subtle accent is usually implied on the "strong" beat(s) of each measure; however, accents can notated to indicate a change from the time signature's implied accents or to indicate strong accents within a passage.

A tenuto mark indicates a portato or ondulé, sometimes called louré bowing. These are played on the string; the bow is stopped briefly (as opposed to lifted) to create a slight separation between the notes, but slurred notes are still played in the same bow direction.

A combination of a dot and slur can mean a hook bow. This is similar to portato, and may occasionally be performed as spiccato instead of staccato.

The dot indicates staccato bowing, but it can also indicate spiccato. This technique uses a bouncing stroke for each note: the bow loses contact with the string, which continues to ring between the separate strokes. Whether this passage is played staccato or spiccato depends on context.

This effect of quickly repositioning the bow at the end of each short stroke produces a strong, detached, accented effect. It can be used at any dynamic level, but is most effective when performed by an entire string section at a loud dynamic.

Moving the bow rapidly back and forth produces a "buzzing" effect, called tremolo. In general, tremolos with three or more lines through the stem of the note are treated as "free" tremoli to be played as fast as possible; two lines or less indicates a measured tremolo to be played as steady quavers or semiquavers.